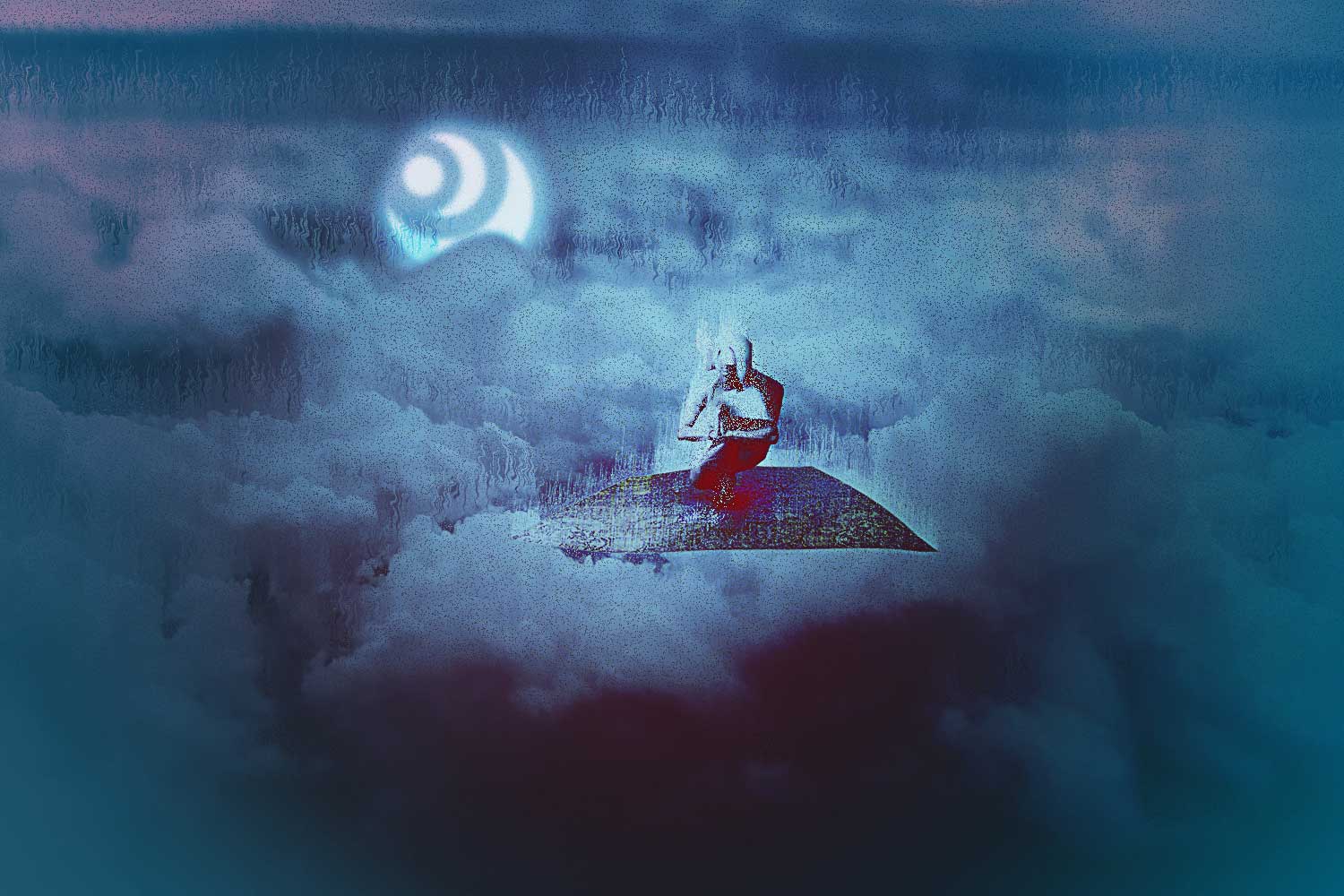 If anyone’s succeeded in predicting the future, it isn’t tech companies or consultancy advisors—it’s sci-fi authors. From flying vehicles on Earth to human settlements on Mars, sci-fi has given us some of the wildest, and truest, visions of what to expect from tomorrow’s technology.

In fact, MIT recently published a study showing that sci-fi is being cited more than ever in human-computer interaction research. So what better way to explore future transportation than by having a look at some of the wonderful mobility solutions dreamed up by classic sci-fi authors?

Jetpacks? Those were predicted in a 1928 novella by Philip Francis Nowlan. Space travel with iPads on board? That was happening in Kubrick’s 1968 classic 2001: A Space Odyssey. Self-driving cars? Those have been around since Paul Verhoeven’s 1990 blockbuster hit Total Recall. And there are many, many more examples.

To learn more about big trends set to change the mobility industry in the coming years, our head of mobility Romet Rahuoja has you covered. But to start dreaming up your next big idea, read on. Because remember, the future is always more interesting, and more complex, than we imagine it to be. If you want to go down in the history books, you’re going to have to think big.

Bester’s novel, which takes place in the 25th century, shows us a world where anyone is capable of teleporting anywhere, whenever they want. This practice, called “jaunting,” is named after a man who escapes a fire by thinking about a fire extinguisher and being teleported to its location.

Scientists quickly understand that jaunting can be taught, provided the person doing it can visualize their destination, and it soon takes over as the world’s primary form of mobility. Transportation disappears, and cars and horses become luxuries for the rich.

With such limitless power accessible to anyone, Bester’s world faces huge social and economic change. Government services begin to crumble. Every time there’s a problem or an unpleasant job to do, citizens jaunt elsewhere. When there’s a catastrophe, residents leave and looters come in, roving through abandoned houses for valuables. People build mazes around their homes to protect their privacy, and start locking women inside, “to protect their innocence.”

What begins as a revolution in mobility ends up undermining the world’s entire social order. Something to keep in mind the next time you’re dreaming about founding that quantum teleportation startup…

Farcasting is another form of teleportation, this time from Dan Simmons’ novel Hyperion. Farcasting differs from jaunting in that it isn’t a human faculty, but a form of technology known as portals, given to humans by a group of self-sentient artificial intelligences called the TechnoCore.

Humans have a complex relationship with portals. Firstly, they don’t know how this AI-generated technology works and have to rely on machines to use it. At the same time, portals need human minds for computational power, and the TechnoCore frequently abuses this relationship to make humans dependent on them.

Although portals make it easy to realize extravagant new projects, they can just as easily turn against their users when something goes wrong. For example, if a house used portals to link rooms located on different planets and that house were destroyed, anyone who found themselves in different rooms would be separated from the rest of the home forever. Not a pretty picture.

Like Bester’s world, Simmons’ vision of future transportation also comes with serious socio-economic impact. The poor have to use public farcasters and pay for them, while the rich have private farcasters they can enjoy with almost unlimited freedom. Instead of creating a network that everyone can benefit from equally, this new technology recreates the very inequalities it has the power to make disappear. Sound familiar?

The Infinite Improbability Drive (Douglas Adams, The Hitchhiker’s Guide to the Galaxy)

Everything’s a wonder when it comes to Douglas Adams. The future portrayed in The Hitchhiker’s Guide to the Galaxy usually leaves readers marvelling at its genius, laughing hysterically, or caught somewhere in between.

In quantum theory, a subatomic particle is most likely to be found in a given place, like the nucleus of an atom, for example. But there’s also a tiny probability, Adams tells us, of it being found very far away, like somewhere near a distant star.

The Infinite Improbability Drive is a faster-than-light drive that harnesses this possibility, allowing its users to travel between two points without having to cross the distances between them. And without being sure where they’ll end up.

Those who use the Infinite Improbability Drive in The Hitchhiker’s Guide find themselves in all kinds of unlikely situations, including having their ship transformed into a giant ball of yarn, being saved from asphyxiation after being launched into deep space, and seeing a pair of nuclear missiles transformed into a sperm whale and a bowl of petunias. If that isn’t mobility disruption, I don’t know what is.

Bistromathics (Douglas Adams, The Hitchhiker’s Guide to the Galaxy)

The third and final nonabsolute number in Bistromathics determines the relationship between the number of items on the bill, their cost, the number of people at the table, and what each person is prepared to pay. Needless to say, this is the most mysterious of all three.

In Adams’ novel, a starship called the Bistromath uses Bistromathics to travel through space. The ship’s central computation room is a fake Italian restaurant table that includes a faded tablecloth and mathematically-positioned cigarette burns. It runs on a series of functions and equations based on the crew’s movement through the ship’s restaurant decor. Take note, Uber.

Catapults (Robert A. Heinlein, The Moon Is A Harsh Mistress)

Heinlein’s classic sci-fi parable takes place in 2075. The Moon has been a prison colony for several decades but is on its way to becoming its own independent, fully-fledged society. Its main revenue comes from crops the colony’s farmers grow in underground farms, which are then launched to Earth through induction catapults, an idea that likely inspired a real invention ten years later.

Unfortunately, the farmers on Heinlein’s version of the Moon are paid poorly by those who live on Earth and regularly discriminated against. After years of unrest, they start a revolution by throwing rocks onto Earth with the catapults they’re expected to use for sending crops.

So remember, future mobility disruptors: always think about the human implications your new invention will have. Useful new tools can turn against the people who profit from them, especially if their workers aren’t treated properly. With great power comes great responsibility…

In Star Trek: Discovery, the mycelial network is a vast microscopic web that functions as an intergalactic network. Its roots, or mycelia, form an infinite number of roads that can be used for travel through space and time.

The mycelial network is interesting because it’s a living being—its name comes from mycelium, the Latin term for fungus. The ethics of using it for transportation are questionable, as any interference with its roots can harm it or cause it to attack in self-defense. When a partial jump into the network leaves half of a starship stuck inside, for example, mycelia attack the part that’s come into contact with them.

Another risk related to the mycelial network stems from time travel. If access to the network were left in the wrong hands, the entire course of human history could be changed forever. Once more, we’re shown how something as apparently simple as a form of mobility can upend the entire universe that surrounds it.

New mobility has the power to turn the world around us upside down. It could transform entire societies (jaunting), it could harm the people who use it and make them dependent on its power (farcasting), and it could even damage the living beings it coexists with (mycelial network).

With every big idea come big changes, good, bad, or sometimes just funny—Douglas Adams, we’re looking at you. So next time you’re thinking up a revolutionary new mobility product, remember to dream big, but act responsibly, too.

BUILDING A FUTURE TRANSPORTATION SOLUTION YOURSELF?

We can help you to build a scalable, secure and successful product before your competitors surpass you. Drop us an email about your idea and let’s talk about what we can do for you.

. Maria is a UX researcher and service designer. With a background in both social sciences and human-computer interaction, she has the best skills of both worlds at her disposal. At Mooncascade, Maria has put her research, analysis and user testing skills into use to help the clients build human-centered solutions with sustainability and the empowerment of human values in mind. View more posts