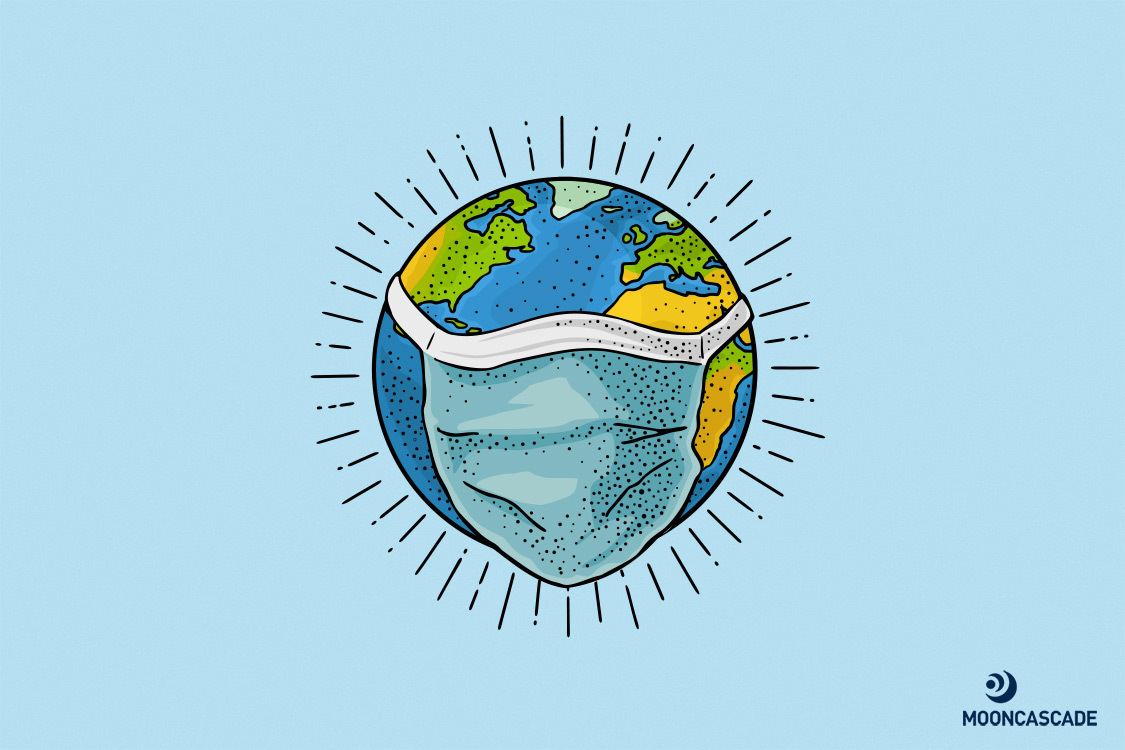 The corona crisis has impacted us all. People, companies, and governments have had to bear the weight of a pandemic that has hit hard and fast, affecting every level of society and every sector of the economy. Like many others, Mooncascade is feeling the market’s unrest and uncertainty—when our customers suffer, we do too.

Although much of the world has come to a screeching halt, one thing is clear. The corona crisis will change our behavior as citizens and our strategies as businesses in an irreversible way. There will be no going back to the “normal” we once knew when this is over. It seems to me that when anyone talks about returning to normality, what they’re really talking about is stability. I believe that the way to create it is to create a new normal.

And by the looks of it, this definitely doesn’t mean that we should despair. Despite all of its negative consequences, the tough period we’re going through contains seeds of hope. For many of us, the Covid-19 shutdown has also been an opportunity to reflect on the values we’d like to live by in the future, including a fairer society, a greener world, and a more collaborative future.

As of today, this future could take many different shapes. Some are positive, some less so, and many are uncertain. It’ll be up to us to choose which one we want to realise. And if we make our decisions now with the good of the world in mind, it could have a far-reaching positive impact once this mess is over. Here’s why.

The state of the economy.

Let’s face it: this crisis caught everyone off guard. A total economic shutdown would have been unthinkable just a few months ago. Now, some of the biggest companies in the world have lost entire revenue streams, watching helplessly as consumers’ daily habits undergo a complete transformation that won’t be easy to bounce back from.

This hasn’t only affected already struggling companies. Highly successful startups like AirBnB and Bolt are feeling the heat as well. To give you an idea of how AirBnB’s revenue has been impacted, there has been a 64% increase in long-term rental offers in central Dublin alone since the beginning of the crisis. It’s estimated that much, if not all of this, is business that AirBnB has lost, as landlords scramble to replace their main source of income. Imagine what these numbers look like on a global scale!

With mobility being heavily limited in most countries across Europe, Bolt has had to face a serious drop in rider usage, too. The company’s numbers over the past two years have been more than impressive: 79.7 million euros in turnover and 61 million euros invested in 2018, with 230 new hires in 2019. Although they launched a new revenue stream – delivering groceries from shops – in only a week, their main business of ridesharing has taken an unprecedented hit. As a result, the unicorn has had to request a 50 million euro loan from the Estonian government and ask its 1,500 employees to take a pay cut as they weather the storm.

Looking at numbers like these, the panic that many of us felt at the beginning of this crisis is more than understandable. From one day to the next, the global economy was shut down after one of the longest uninterrupted periods of growth in the history of the world. But as the initial shock fades, the question mark hanging over everyone’s head is progressively shifting from the present to the future. Will we just return to the way things were once this is over?

Though this isn’t the first economic crisis in recent memory, this one differs from previous crises in one major way: you can’t stimulate the economy while simultaneously asking people to stay home. In the 2008 financial crisis, the economy may have been hit hard, but businesses could still operate. In the Great Depression, governments were able to cut unemployment by ramping up the manufacturing of war equipment, medical equipment, and food production on the eve of World War II. None of this is possible today.

Instead, governments are catching onto the idea of putting people’s health and well-being first, and markets second. There are increasingly realistic plans to put basic income schemes into action in Spain, for example. As Steve Stein puts it in a LinkedIn post, more and more people are expressing the need for a “modern renaissance” that emphasises responsibility, sustainability, and equality over greed once this crisis is over.

For the first time, many of us are giving ourselves the permission to change. Why rush to an office, stuck in traffic, when you could pollute less and work from the comfort of your own home? Why eat lunch at your desk when you can have family lunches in the middle of the work day? Why waste food when you could get creative with whatever’s left in your pantry? There seems to be a growing understanding that less can be much, much more. The numbers are already there to show it: air quality, for example, has increased by up to 40% in cities that have asked citizens to stay home over the past month. And citizens in Punjab are seeing the Himalayas for the first time in decades thanks to the drop in pollution.

However, we have to keep our sights set on the future. Although the pandemic has led to a dip in global greenhouse gas emissions, this trend is predicted to be temporary. Our behavior as a society needs to change widely and sustainably for these changes to last. In the words of Andrew Norton, director of the International Institute for Environment and Development (IIED): “[The dip in global greenhouse gas emissions] must not distract from the urgent need for rapid fundamental changes in infrastructure, energy, land use and industrial systems to set us on a path to net zero emissions globally by 2050 at the latest.”

Which brings me to my next point.

The corona crisis has led us to a crossroads. Life hasn’t been easy these past few weeks. It’ll continue to be challenging for months to come. Yet it’s also given us the chance to imagine a better, more hopeful future. For companies, this means two things. The way out of the crisis won’t be quick, and the way forward won’t be carved out for them in advance. We’re going to have to learn how to react, adapt, and collaborate in ways we aren’t necessarily used to.

In his 2016 book The Third Wave, former CEO of AOL and pioneering entrepreneur Steve Case makes the point that the internet has gone through two major phases or “waves” since its inception. The first wave involved companies like AOL laying the foundations for consumer usage of the internet, working with governments and institutions to make this possible. During the second wave, businesses were able to use this groundwork to realize game-changing ideas overnight, implementing them on a global scale at the snap of a finger. This was the era where companies like Facebook, Uber, and TransferWise first got their start.

Though Case’s book was written four years ago, it predicted a third wave of companies that would once more have to work with governments to make their ideas happen. These would be companies aiming to change major sectors like health, transportation, energy, or food. Although there were already signs of this third wave’s onset before Covid-19, it is now undeniably a global phenomenon. Governments across the world are rushing to find solutions for making their education systems, food supply chains, and healthcare systems more resilient and better-adapted to the challenges of future pandemics.

As the current crisis continues to accelerate this third wave, it’ll heavily impact both the expectations we have of businesses and the skillsets they’ll need to succeed. To build a successful company in the coming months, entrepreneurs will have to marry innovation with cooperation, looking closely at critical problems while working hand in hand with legislative bodies to implement their solutions. The approach of the second wave—vilifying large corporations and pointing fingers at the public sector’s inadequacy—simply won’t cut it moving forward.

If we really want to get out of this crisis as quickly as possible and hold onto the positive changes that have come with it, we need to learn to get along. We need initiatives like The Global Hack, which was started by a group of entrepreneurs in Estonia and endorsed by the government only a couple of days later. We need to act together. Only a truly collaborative mindset can get us through this.

We’re in this for the long haul.

It’s still too early to tell whether the way out of this crisis will form a V-curve, a U-curve, or an L-curve. Either way, the future is going to be vastly different from anything we were used to in the very recent past. We’ll need resilience to get through this. We’ll also need flexibility and a collaborative spirit, working alongside institutions we aren’t used to partnering with, and facing big challenges that affect millions of people’s lives.

We’ll have to think like startups, but we’ll have to do it with the greater good as our most urgent priority. And if enough of us combine forces, we can use our skills to help make the world a better place than any of us had ever imagined possible. All we have to do now is figure out what needs to be done to make it happen, and get to work. To quote Elizabeth Gilbert’s most recent TED Talk: this is a marathon, and we’re only on mile one.

Need a running partner or a coach?

With billions of people in lockdown, the only way for businesses to survive is to go digital – you need to tap into hidden opportunities, make smart decisions and get to the market fast. We can help you with that.

Discover the right opportunities for your business with our contactless workshops tailored to companies working remotely world-wide.

. Hanna-Mari is our Business Lead for European Markets. Previously part of the team at Monese, she has varied experience working in a rapidly changing startup environment across different roles and responsibilities. At Mooncascade, she helps our clients to stay on top of the competition and achieve their business goals. View more posts